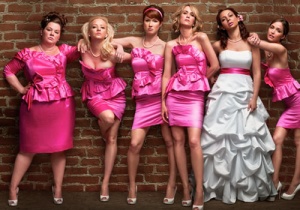 Bridesmaids has been all the talk among critics and audiences this summer and for good reason. Written by Kristen Wiig (SNL) and directed by Paul Feig (The Office), Bridesmaids rips the veil of “traditional femininity” off the entire getting-to-the-altar spectacle. The most common question posed about this film is “Will audiences respond to a comedy led by an entirely female cast?” Judging from box office reports, the answer is yes.

Not that we needed another reason to love Kristen Wiig, but this film gives us many. In a turn from the quirky, uncomfortable and awkward characters she has endeared us to in her tenure on SNL, Wiig’s Annie is a realistic and relatable character who slowly unravels throughout the course of the film. She has followed her passion into bankruptcy and continues to sleep with the wrong man (a hilariously douche-y Jon Hamm) while ignoring the Mr. Right-under-her-nose (Chris O’Dowd – adorable!). All the while she insists she’s fine as her best friend, Lillian (Maya Rudolph), gets sucked into the wedding whirlwind with a newer, prettier, more perfect sidekick (Rose Byrne). I can’t remember the last time I related so closely to a character. It’s hard to be the under-employed, broke, single friend – trust me.

Wiig is responsible for co-writing the script as well as some of the funniest, screen stealing moments. The entire airplane scene was worth the $10 ticket alone. Five very funny women support Wiig, but it is only Melissa McCarthy, as the sister of the groom, who succeeds in sharing the spotlight.

Using her weight as a prop rather than a punch line, McCarthy brings heart and sincerity to what could have easily been a cruelly stereotypical role. By offsetting some of the traditionally feminine moments with things that are traditionally unfeminine, or at least unacceptable, like emotional breakdowns and bathroom humor, Bridesmaids attempts to present a more realistic view of marriage. Unfortunately, it also sacrifices comedic talent. Ellie Kemper (The Office) and Wendi McLendon-Covey (Reno 911) are comedic gems, but in this film their talent is wasted as stereotypical archetypes of “married women”, reciting clichéd dialogue not to mention a gratuitous make-out scene. Boo. Nonetheless, as Manohla Dargis of the New York Times writes, “It’s nice to see so many actresses taking up space while making fun of something besides other women.” And, as one of two male characters in the film, O’Dowd’s honest and caring police officer who is unapologetically interested in Annie may be the Lloyd Dobbler for thirty-somethings.

What I loved most about this film was its presentation of the modern female experience and it is in this presentation that Bridesmaids was most subversive. Annie is kind of a mess but so what? Who says you’re supposed to have everything figured out and by a certain age? And since when does marriage prove that you do? For women, the markers of success have historically been a husband and a family, but now we can also add career to that list. So when you have neither, what are you left with? Annie’s journey to figure this out is painful, awkward, embarrassing and, most importantly, hilarious.

Cross posted at Love YA Lit