“She wins who calls herself beautiful and
challenges the world to change to truly see her.”
Naomi Wolf, The Beauty Myth 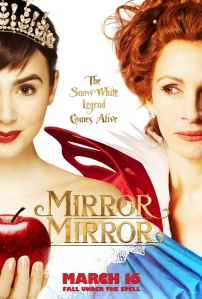 There have been countless retellings of the Snow White story over the years. American’s are most familiar with Disneys 1937 animated version based on the Grimm Brothers’ story of Little Snow White.  Snow White was Walt Disney’s first motion picture hence marks the birth of the original Disney Princess. The Snow White story is my favorite of the all the princess tales because it explores a fascinating aspect of female gender privilege and power: beauty. It also is a classic mean girl tale ever so relevant considering the incidence of bullying in our nation’s schools. Mirror Mirror is Disney’s updated version of the classic tale and might be the studio’s first successful attempt at creating a feminist fairy tale.

The basic premise of the story is the same but with a few modernized plot lines: the Queen (Julia Roberts) has manipulated her way into power and is taxing her citizens into poverty in order to maintain her lifestyle. Her obsession with her own vanity and jealousy over the beauty of her step-daughter, Snow White (Lily Collins) drive her to order that the girl be taken to the forest and killed.  Snow White is set free by the huntsman ordered to kill her and left in the woods where she befriends a crew of dwarf bandits. 7 to be exact.  On is the smart one. One is the mean one. One thinks he’s a wolf. And then there’s the creepy one. Seriously, one of the dwarfs hits on her the whole time and it gets a little weird.  Snow White realizes the conditions of her kingdom and enlists the bandits to help return the money to the people. It’s all very Robin Hood and his Merry Men. Oh yeah, and there is a Prince (Armie Hammer – who is just about as cute as his name). Plus, a beast that lives in the woods.

Director Tarsem Singh creates a handful of visually enticing moments but everything evokes the feeling of something we’ve already seen.  Guests of the Queen resemble residents of The Hunger Games’ Capitol. In Singh’s version The Queen walks through her mirror into this odd other world where she enters an igloo made out of straw and converses with her own reflection – which looks like an Austen character painted white. It’s very Alice in Wonderland meets Lord of the Rings. The effect of it distracts from the poignancy of the message – that vanity is our greatest weakness. The evil of Roberts’ Queen is less sinister more jovial heartlessness rooted in sincere delusion – a cross between Meryl Streep in the Devil Wears Prada and any one of The Real Housewives of Beverly Hills.

The best part of Singh’s re-visioning is Snow White herself. Reintroducing the original Disney Princess in the image of what an actual princess might look like – a political figure, heir to a throne, fighting for her country – is a welcome change to the traditional character who had very little personality beyond beauty. In fact, Snow White 2012 is immediately introduced as curious and thoughtful, if not a little naïve. On her 18th birthday she sneaks off castle grounds into the town and returns with opinions and accusations about how the Queen is ruling the kingdom. It marks a significant identity shift, a coming of age moment when she steps into the skin of the woman she is to become: a leader.

Similar to Katniss Everdeen, another brave teen girl on the silver screen right now, this Snow White is not a helpless child or a detached beauty queen. She doesn’t frolic around the woods singing and chatting up woodland animals until her Prince comes to rescue her. For both of these girls, beauty, as well as romance, is a luxury.  It’s just a distraction from the reality of their lives – survival, protection and helping their country. It is a powerful message for both girls and women; a reminder that we can easily become our own Evil Queen so committed to our vanity that we have less time, confidence and energy to do what’s really important in our lives.

Note: If you are interested in another unique perspective on Snow White try author Gregory Maguire’s adaptation,  Mirror Mirror.