I wonder if my students ever get tired of hearing “Yeah, it’s all white dudes.” #ms_swiz #oscars #media #popculture

The Academy Awards will soon unveil the very best in filmmaking in 2014. As the prediction chatter ricochets around the web, our curiosity about the level of racial and gender representation of the Academy Awards is the focus of our next Diversity Gap study. We reviewed the Academy’s entire 85-year history and the results were staggeringly disappointing, if not surprising in light of our past Diversity Gap studies of The Tony Awards, The Emmy Awards, the children’s book industry, The New York Times Top 10 Bestseller List, and US politics, where we analyzed multi-year samplings and found a disturbingly consistent lack of diversity. 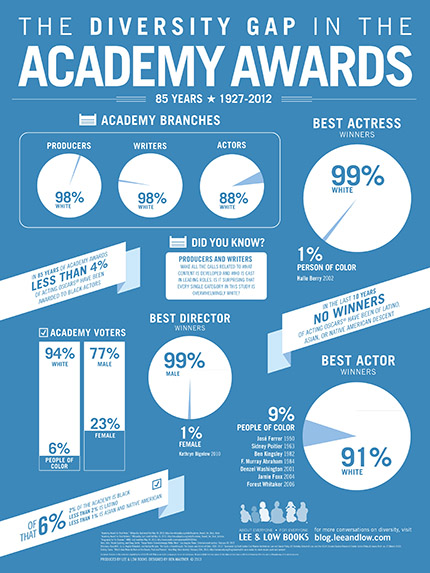 Since the Academy Awards was founded 85-years ago: