A very brief history of some of my favorite films. Originally published on Thought Catalog and then unpublished at the writer’s request on account of Thought Catalog being a host for racist, sexist and downright horrible writing. 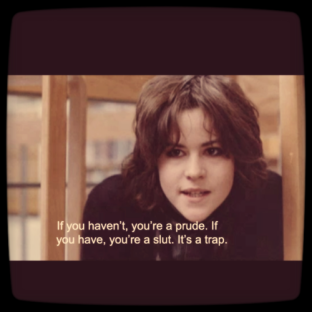 If you grew up in America chances are you’ve either been called a slut or called someone a slut. If you’re a girl, it’s probably both. If you grew up watching movies, as I did, you have been inscribed with images that encourage a slut shaming mentality. Slut shaming is rooted in conventional (biblical) wisdom that values a woman for her purity and deference to male sexual desires as opposed to supporting a woman’s choice to be sexual active in any way and with anyone she pleases. It’s the difference between treating someone as a sexual being versus a sexual object. We all know the difference between a being and an object, right?

In Hollywood films, slut shaming most commonly appears in the form of punishment of the character, like in every horror movie ever made where as soon as a girl has sex she dies, or an overall positioning of the character as bad, dirty or inconsequential. Basically, if you’re a girl and you have sex in a movie you’re either evil, unimportant or are going to die. The slut character has become a norm in films that focus on adolescence just as the term has become common vernacular in high schools across the globe. It seems you can’t have a story about girls lives without also encountering a slut and Hollywood has done it’s best to remind us why it’s not worth it to be “that kind of girl.” 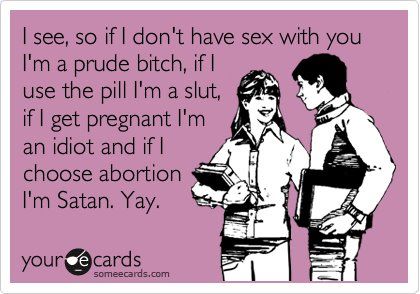 Y’all, remember Shag (1989)? It’s the story of four girls about to graduate high school and spend one last weekend together at the beach. The character of Melaina is a rule breaker from the beginning, a preacher’s daughter who has to sneak out to spend the weekend with her friends. While all the girls are having sexual experiences and awakenings on the trip, Melaina is the only one assertive and confident in her sexual interests. In turn, she is nearly date-raped and “saved” only by the two “girlfriends” of the guy who in a jealous rage Melaina out of his car, force feed her booze and after covering her with shaving cream and toilet paper, abandon her in the woods. Melaina is judged and punished and what about ol’ boy? Oh, he just drove off.

John Tucker Must Die (2006) is the perfect example of how slut shaming is reserved only for women. It is the Hollywood version of the Stud vs. Slut mindfuck. The plot revolves around three women fighting for the attention of one guy who has been secretly dating them all simultaneously. Each girl is a recognizable trope: the smart one, the cheerleader, and, of course, the slut, and John Tucker is the stereotypical embodiment of a “man” – athletic, charming and sexually insatiable. In the scene after all three girls have just broken up with John, the “slut” character, Beth, laments that she “couldn’t even enjoy the break-up sex.” When the other girls turn to her with accusing eyes, or perhaps jealously, Beth proclaims, “Oh my god, I am a slut.” Whether she truly believes it or not is unclear but the message that she should be ashamed of her behavior is not. In an earlier scene, Beth also confesses to compromising her vegetarianism stating, “I can’t believe I ate meat for him.” Not only another tongue in cheek dig at her “sluttiness” it also further affirms how her character is lacking any moral values. You know, because she’s a slut. Beth’s self-identifying as a slut speaks the double bind that girls face when exploring sexuality. Especially from other girls.

One of my favorite scenes in Dazed and Confused (1993), because it’s just so real, is when Simone begs Shavonne to tell her what the other girls have said about her and Darla and promises she won’t get mad. Shavonne relays the gossip: “She called you a bitch and you a slut.” Darla laughs in response to being labeled the bitch while Simone has an immediate defensiveness to being called a slut, which she quickly covers up with a hair flick and breezy “I’m not mad.” This is the nuanced aspect of slut shaming that poisons girl’s relationships to themselves and to each other. (begins at :38)

Simone is hurt that girls who likely engage in the same behavior perceive her as a slut. It also suggests that she is aware of the detrimental affects of the term. Slut isn’t the same as bitch. Anyone can be a bitch, but when someone is calling you a slut they are making a very specific claim about the kind of person you are. And it ain’t good. Nor is the validity of any consequence because sometimes it only takes the allusion of promiscuity, or a certain cup size, to earn the slut badge.

Easy A (2012) is a modern adaptation a classic slut-shaming tale, The Scarlet Letter. And in the end, Olive is a prude in slut’s clothing; she hasn’t actually done the deed with anyone. However, the belief that she has participated in sexual behavior forces a responsibility upon her that culminates in the scene between her and a male friend. Throughout the film, Olive has created this reputation of being sexually active as a farce and then she is faced with a guy who expects her to behave a certain way because he thinks she has behaved that way with others. This is a dangerous area because it is directly related to sexual assault and rape. It’s entitlement. Plain and simple. Here’s the thing, dude. It doesn’t matter if I have had sex with one or a hundred guys before you. I can still not want to sleep with you. Deal with it.

While it is kind of weird to think of slut shaming someone who has not had sex it goes back to the root of the issue: making a negative judgment and devaluing a woman based on her sexual behavior. When Cher questions whether Tai and Josh would be good together in Clueless (1996), Tai is offended. She retorts by attacking Cher for the one thing that now alienates her from her peers: “You’re a virgin who can’t drive.” Simply insulting Cher’s driving ability does not yield the same power as calling into question her attractiveness to the opposite sex. Cher is being shamed either for her choice to not have sex or the fact that no one wants to have sex with her. What’s a girl to do?

Do what, and who, you want – safely and respectfully. Hollywood will catch on.