Originally published by The Frisky.

So, the question I’d like to see Hollywood answer is where are the movies that are simply about women?

Why not just create a female spy character that may grow to be as iconic as James Bond so that young girls can watch her? The idea that we have to simply put a female body in to a male character is not only lazy and severely lacking in creativity but it’s sexist. It tells us that stories about women are only valid when they are constructed through the male gaze and embody traditionally masculine gender roles. An all female Oceans 11? I’ve already seen Sex and the City.

Introducing an exciting collaboration between POPGOESALICIA & The Identity of She…FEMINIST T-SHIRTS! The first in a series of 3 designs you can order this Feminist AF tank RIGHT NOW. You’ll be stylish & activist & a supporter of independent artists. Way to go, you! Order yours here. 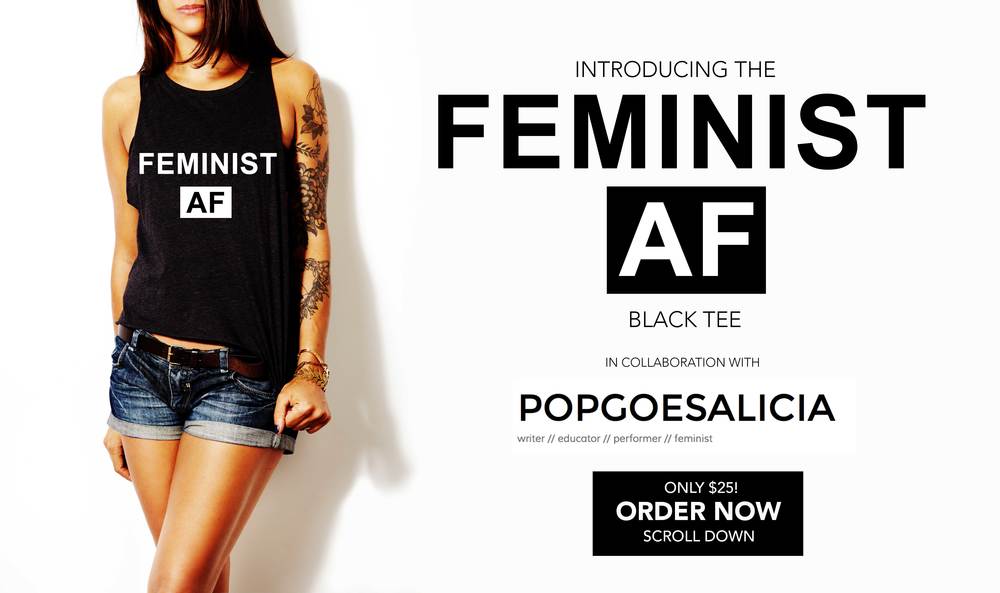 The Identity of She is a blog & business serving the abnormal, the not simple, and the undefined. We produce products that celebrate uniqueness; all things not easily understood.

Below is a sample from the most recent blog post by TIOS founder Eboni Lacey exploring the feminism of Amber Rose. Read the full article here.

Though Amber Rose did strip at one point of time in her life as well as date Kanye West, she has many other accolades that people are just now noticing. I find it incredibly disturbing that people still refer to her as a “former stripper” or as “Wiz Khalifa’s ex-wife” without acknowledging that she’s an active philanthropist, model, eyewear designer, actress, filmographer and even an author.

Also, she became a national advocate for all women when she took over the Slut Walk movement, a historic worldwide campaign that started originally in Canada after a Toronto police officer told a crowd of college women that if they wanted to avoid sexual assault, they shouldn’t dress like sluts.

Through reading her story, I’ve come to realize it’s not women like her that are sending the wrong message to young girls, but the asshole of Patriarchy that continues to degrade women by referring to them as former strippers, no matter what else they’ve done in society.

As a feminist, I’ve finally understood that you HAVE to be pro-women in every aspect, from the woman who gets abortions every month, to the woman that fucks old men, and even to the woman who strips for free and loves every minute of it.

Happy Birthday to one of my favorite holiday films. Here’s a piece I wrote for the Mixtape Madness Film Series 8 years ago (!) Still relevant.

It’s that time of year again. The holiday season is upon us – a brief moment of time known to most of us in western culture as the season of giving. With the current economic crisis, and a heightened awareness of conservation due to our struggling environment, many Americans are preoccupied with the challenge of gifting those we love. What is often overlooked during this consumer fueled holiday is the most precious and valuable gift of all – Love. It is this gift that is the motivating force behind Tim Burton’s unexpected and unconventional holiday classic, Edward Scissorhands. So this holiday season why not take a cue from Burton’s unique protagonist? Stay away from the stores and, instead, give someone the gift of yourself. If you’re unsure of how to do that, as most of us are, take a deep breath, smile and try the following:

Feminism does not come with a rulebook or with guidelines.

What does it mean to be a feminist? What are the collective agreements that link us in a common feminist identity and what defines your personal feminism? Join professor and performer, Alicia Swiz, in exploring what drives modern feminism and the commitment to living your feminist values in a non-feminist world.

Drawing from her personal experience and her academic training, Alicia Swiz facilitates conversations about what it means to be a feminist in 2015. One part lecture, two parts Q&A, Alicia uses humor and candid observation to provide insight and awareness about gender, feminism and culture. 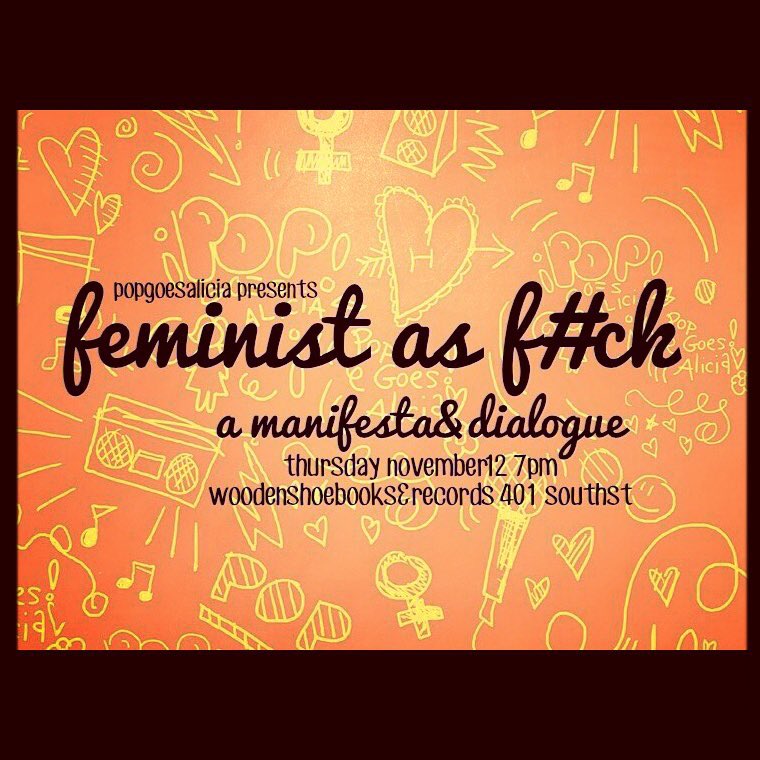 I am beyond proud of this piece as I am of the Chicago Literati for taking on taboo topics as well as all the writer’s who work I cited who continue to fight the good fight.