Today marks the end of an event filled week that began last Tuesday with the arrival of my cousin, Janna. Her first visit to the Windy City, the California girl may have been the reason for the unusually warm weather. We celebrated by thrifting in Wicker Park which led to extra early happy hour at Big Star.

It has been confirmed by the California native – their margaritas are really, really, really good. Also, best guacamole in the city.

Janna was in town for the 2012 Association of Writers and Writing Programs Conference (AWP) to promote her literary journal, Under the Gum Tree. 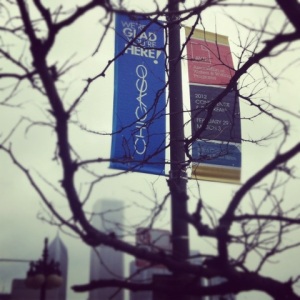 I was crashing. First order of unofficial business: attend the keynote presentation by Margaret Atwood. I read The Handmaid’s Tale in my very first Women’s Studies class so this was a really big deal to me. Hosted in the historical Auditorium Theatre of Roosevelt University, Ms. Atwood gave a delightfully inspiring, albeit brief, talk about the difference between “Art” and “Craft.” Giggling at her own jokes and poking fun at her own mortality (“Isn’t she dead?”), Atwood suggested that craft is the tool. Her analogy “If you want to slit someone’s throat you have to sharpen your knife.” Yeah. She’s awesome. 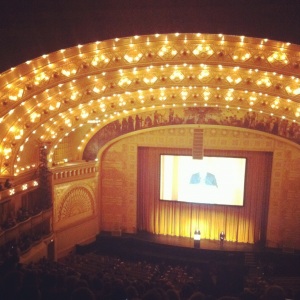 Friday, I was lucky enough to sneak into a panel: Memory Without A Net, and OHMAGOD – my friend, idol, and all around swell gal Kelsie Huff was a presenter! After jumping up and down, hollering and doing some crazy hula-hoop dance inspired by my last name (in the Grand Ballroom of The Palmer House, mind you), I sat down with Janna to enjoy the panel. Holy amazing. There are some kick ass storytellers in this city and they are making shit happen all around town. Kelsie performed a piece from her critically acclaimed solo show, Bruiser: Tales from a Traumatized Tomboy.

The rest of the panel included stories by Dana Norris, Shannon Cason, Kevin Gladish, and Scott Whitehair plus and extended, and very valuable, Q&A. For a list of storytelling events around Chicago go here.

Next, we hit the book fair to promote UTGT and do some shameless self-promotion (so what if I only gave my card to the cute boys.)

For real though, I discovered the local publisher Haymarket Books (not just because he had a beard)and bought a copy of IraqiGirl: {Diary of a Teenage Girl in Iraq}.

Look for my review coming very soon at Love YA Lit.

Saturday we continued our support of live performance and I introduced Janna to one of my favorite Chicago discoveries: Paper Machete – a live magazine presented 3pm every Saturday at The Horseshoe Bar. IT’S FREE!!! We ended out evening at The Laugh Factory (boo!) compliments of Ms. Ever Mainard (YAY EVER!). I met Ever through the FemCom community and have been continually impressed and inspired by her work. That night she blew off her entire set to riff on a “wolfpack” of fellas spanning the front row. Hilarious.

Lately, Ever has received a lot of attention for the following bit, which I love.

Sunday = Brunch at The Fountainhead because they are the only bar to carry our new favorite beer: New Belgium’s Cocoa Mole. Seriously y’all, this beer will change your life. And, I am not even a beer drinker. Do it.

It was a great visit with my cousin and a great opportunity for finding inspiration and building community. Please follow the links if you want to know more and feel free to reach out to me or Janna or any of the other people/places mentioned in this post. We love to hear from our audience!

As a performer, I’ve recently been exploring stand-up. This is in large part due to Chicago and a class called the Feminine Comique. I discovered this all female class through a Reader article on local stand-up and Fem Com creator, Cameron Esposito. Now taught by the hilarious Kelsie Huff, this class is amazing.

My graduation show was awesome. My set received a lot of laughs and an audience full of friends supported me. A handful of positive open mic’s later and my long dormant creativity was back and ready to find its next manifestation.

I want to write and perform a solo show; I want to collaborate; I want to do a web series; I want to produce a show to showcase other female talent.

Then I went to Cole’s and bombed. In front of Cameron and all the other cool lady comics I want to like me.

Comedy Sportz – same. This time in front of Kelsie and Kristin Clifford.

That was January 28 and I haven’t performed since.

What am I so afraid of that I don’t even want to walk into the room? Why do I all of a sudden feel like I am the new girl in the cafeteria with no one to sit with?

I’m too normal. I’m not interesting enough. I’m too pretty. My hair is too long. I’m just another straight girl whining about boys. I’m not as cool as the gay girls with their side mullets and leather jackets. The girls who I long to be accepted or at least respected by. I’m too old. I don’t want to spend all night at the bar hanging with 23 year olds who I can’t help but be jealous of because they’ve already figured it out where as I am just discovering this part of myself. This part of myself that, at 33, feels like it’s too late. And, I don’t want to make jokes or try to make you laugh. I want to make you think. I want to talk about shit that pisses me off. I want to call your attention to stuff that is idiotic, annoying, or just plain fucked up. Sometimes it’s funny; sometimes it’s not.

And, that shit is scary as hell.

So, I’m trying out stand-up. It began with participating in the Feminine Comique, a 5 week class for girls only, created by the ever hilarious Cameron Esposito. My class was taught by one of the funniest ladies I have ever met, Kelsie Huff , who performs solo and as a member of The Kates. Click all the bold words for info and videos!

Class was awesome and it culminated in a showcase for all us new kids.
Here is my bit: